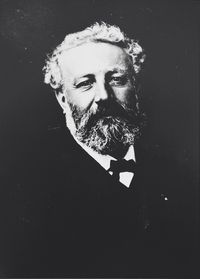 House of Jules Verne in Amiens

In 1882, Jules Verne and his wife Honorine moved in this house in the corner of Charles Dubois street and Longueville boulevard. Jules Verne is then 54 years old, and his success is at its highest. They rent the place until 1900. The house is vast and has two floors, a large attic and a tower toped by a panoramic viewpoint. The kitchen, the outbuildings and the stables constitute the great left wing of the building (nowadays it is the greeting hall)

About his life and work