When Jules Verne left to continue his studies in Paris in 1847, the die was cast: “Literature first and foremost, since only here can I succeed, since my mind is invariably fixed on this point!” Unshakeable in his determination, even when he appears to give this up to take up a position as a stock broker and enter into a marriage of convenience, supported by his worried but understanding parents, he would take fifteen years to find his way, combining conventional literary forms and searching for “new systems” in a writing strategy from which he would never depart. In 1862 he offered his story A voyage in the air to the publisher Pierre-Jules Hetzel, who had just returned to Paris having been forced into exile after his involvement in the events of 1848. Published the following year under the title Five weeks in a balloon, the novel was an immediate success and launched the “Extraordinary Voyages” series, to which Jules Verne, tied to the Hetzel publishing house by five successive contracts, would devote the rest of his life.

This relationship between the author and his publisher, “probably there is no other such example in French literature”, is always much commented upon. Hetzel certainly did continually intervene in the writing process, correcting the style, offering his opinions about plot and characters, not approving situations which went against his ideological outlook or his commercial interests. However, it was in fact a real dialectic relationship that grew up between them. Jules Verne’s talent, which put up resistance to many requests, was stimulated by his publisher’s “fits of anger with the pencil”. Moreover, by taking on responsibility for the publishing house and the business side, Hetzel ensured that the author had regular and continuous work, and by enabling Verne to live from his writing, the author was free to create with confidence. Hetzel’s astute commercial policy and great talent for marketing greatly contributed to the author’s success. Indeed, posters and specially packaged New Year’s gifts (cartonnages d’Etrennes) were extremely effective promotional tools. Lastly, we are indebted to him for the illustrations that accompanied the novels and which so strongly reinforce their powers of suggestion; working like many windows that open directly into the dream, they have become an essential additional part of the novels.

On and under the earth, on and under the seas, in the air and across space, little by little this is how the fictional encyclopaedia of the ”worlds known and unknown” evolved, that make up the “Extraordinary Voyages”. An exact contemporary of the great discoveries of the second half of the nineteenth century, Jules Verne undertakes “a systematic tour of the globe”. Travel, adventure, knowledge and searching for oneself are the four directions in Verne’s writing. He looks at what is happening around him at the time when our current world was taking shape, when the global village and the problems connected with it were coming into place, he is a vital witness who helps us better understand what we have become.

To be successful with such a project Jules Verne drew upon his lyrical sensibility which could reach exaltation, as well as on his sense of humour in evidence since his childhood, humour which could not resist schoolboy pranks but which was spot on most of the time, and on the skill of the dramatist that he always remained. The fantastic, which is even stronger for being contained by his concern to be plausible, is always below the surface and everywhere present. It suddenly appears in the description of the extraordinary machines Jules Verne conjured up to be used as the vehicles for his journeys: from Dr Fergusson’s Victoria to Robur’s Albatross and Terror, as well as Nemo’s Nautilus and the lunar crater that transports Ardan and his companions. Telluric inspiration permeates his writings, permanently drawing upon the four elements – air, water, fire and earth – and the founding legends connected with them.

In this room, you can see the exhibition Jules Verne et l'astrolabe d'Uranie :

Immerse yourself in adventure and embark on an extraordinary voyage with Jules Verne!
The Jules Verne et l’Astrolabe d’Uranie exhibition features a selection of strips from the comic published by Ankama Editions in 2017 and 2018, written by Esther Gil and illustrated by Carlos Puerta. Illustrated as far back as the original  Pierre-Jules Hetzel publications, the work of Jules Verne retains obvious links with the comic. The selected pages are intended to be representative of the historic context, technological advances in the 19th century as well as the visionary aspect of the stories of Jules Verne which continues to inspire many authors to this very day…

6. The Voyages in the theatre

Serialized in the newspaper Le temps in 1872, Around the World in Eighty Days was Jules Verne’s best-seller. 108,000 copies were sold of the first edition, followed by illustrated editions, new editions, translations, adaptations for cinema and television, cartoons… Jules Verne was himself responsible for the first of these adaptations, as he returned to his first calling and working with Adolphe Dennery he turned the novel into a theatrical extravaganza. Triumphant performances, which filled first the Porte Saint-Martin theatre then the Châtelet theatre, increased Jules Verne’s fame and brought him financial security. The many “spin-off products” inspired by the novel and play (board games, jigsaw puzzles, magic lantern plates …) also bear witness to this success, and were but the start of a long series that still continues today.

The experiment was repeated, just as successfully, for Michel Strogoff and Captain Grant’s Children. 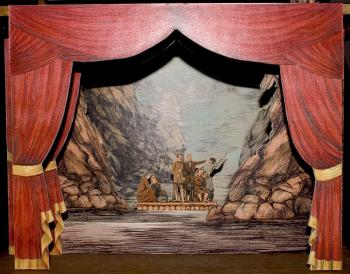 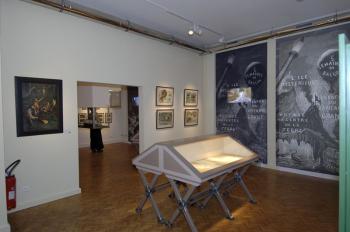 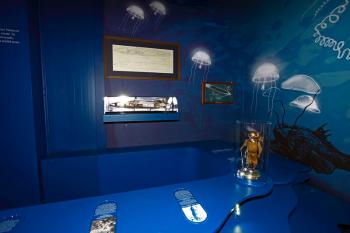 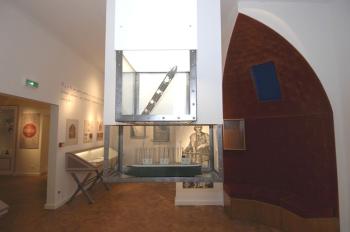